With imminent increases in groundwater abstraction for uranium and copper mining in the Namib-Naukluft Park, this project aims to evaluate the degree to which the unique plants endemic to the Namib Desert are dependent on groundwater. 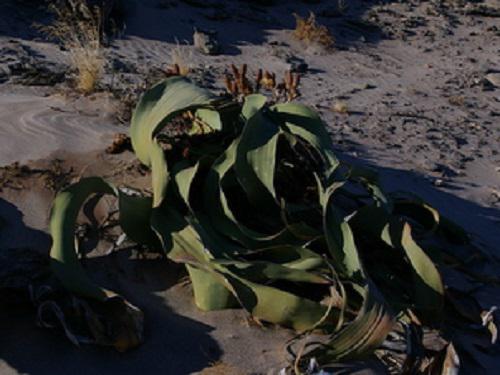 A W. mirabilis in a rocky habitat near Old Hope Mine.

The Namib Desert is hyper-arid in terms of rainfall, but receives up to 100 days of fog each year. The occurrence of fog and the distribution of plants endemic to the Namib have long led to suggestions that the plants utilize fog as a water source. The ability to take up fog water has been shown for a dune grass (Stipagrostis sabulicola) and two shrubs (Trianthema hereroensis, Arthraerua leubnitziae), but remains an open question for other species. 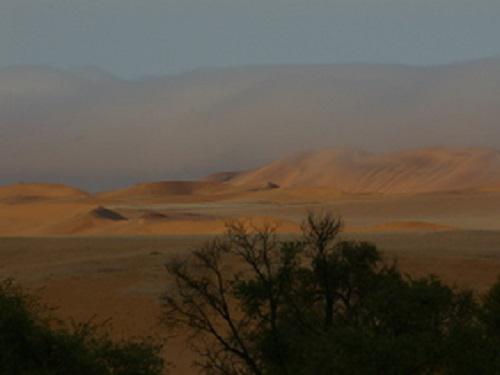 A morning fog over the Namib dunes.

In particular, Welwitschia mirabilis (CITES Appendix II) is thought to have a deep tap root, and may be dependent on groundwater that is threatened by increased mining operations (uranium and copper) in the Namib. This study will focus on the water relations of W. mirabilis and eight other species in the three habitats of the Central Namib: dunes (S. sabulicola, T. hereroensis, Acanthosicyos horridus), dry riverbed (Acacia erioloba, Faidherbia albida, Tamarix usneoides), and gravel plains (Zygophyllum stapffii, A. leubnitziae). Stable isotope geochemistry and groundwater surveys will be used to help distinguish the relative importance of the potential water sources (fog, groundwater, surface water) for each plant species.

The stable isotopes of oxygen (δ18O) and hydrogen (δD) can be used to determine water sources, and those of carbon (δ13C) and nitrogen (δ15N) to evaluate photosynthetic pathways and nitrogen cycling. Plant, soil and water samples will be collected and compared along various environmental gradients. It is expected that the impact of fog water will be greatest closer to the coast and towards the tops of dunes and inselbergs. Groundwater utilization is expected to be greatest among the tree species in the riverbed, as well as W. mirabilis and A. horridus.

The results of this study will help guide the management and protection of the Namib Desert ecosystem. Ongoing copper exploration at the Old Hope Mine site within the Namib-Naukluft Park makes this work immediately relevant. The southernmost W. mirabilis population occurs on this site. If a mine is undertaken, the water table will be lowered significantly. In order for the park officials to effectively weigh the impacts of this potential mine, they need to know how dependent W. mirabilis is on the groundwater. Although it is commonly thought that this long-lived and enigmatic plant utilizes fog as a water source, long-term observations show that leaf growth is correlated with rainfall, not fog. Stable isotopes provide a robust, non-destructive, way of determining water sources in this scenario.