The Effects of High Temperatures on Behaviour, Reproduction and Nestling Physiology in the Southern Ground-Hornbill

Global warming is now a reality and there is mounting evidence that high temperatures affect reproduction and physiology processes in wild animals. Animals that live in hot climates are particularly vulnerable to increasing temperatures as they are exposed to conditions that threaten their ability to maintain safe body temperatures. In birds, high temperatures have been found to affect nestlings, reducing their growth rates, body condition, and survival rate. This can occur through direct effects such as high nest temperatures, and through indirect effects such as reduced delivery of food to the nestlings. 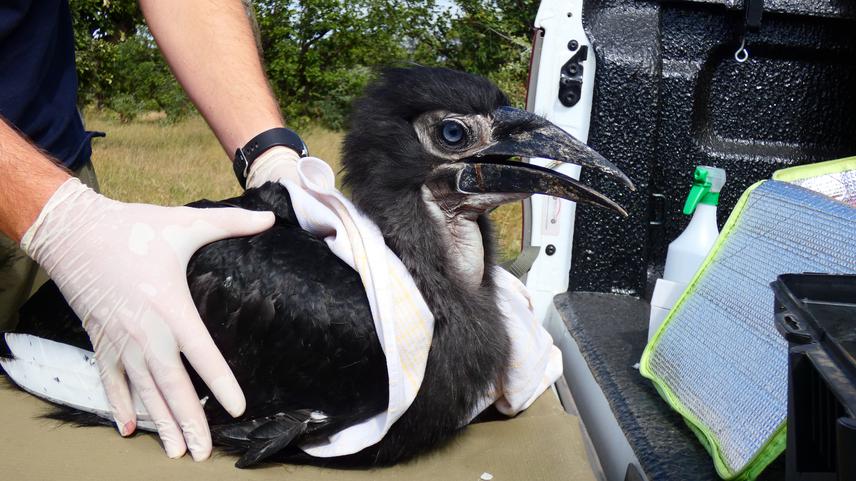 This project aims to understand the direct and indirect effects of high temperatures on nestling growth and physiology and to understand behavioural responses to high temperatures in both summer and winter and how this influence reproduction. It also aims to identify the critical factors (e.g., shade, adequate nests, ideal habitats) that will reduce any negative effects of high temperatures. I intend to conduct this research on the southern ground-hornbill, a flagship species of the savannah biome that is culturally and ecologically important throughout southern Africa. Known as “thunderbirds” or “rain birds”, considered the bringers of rain in many cultures, ground-hornbills are easily recognised, iconic and admired by the public, making them a major attraction in national parks. However, because of their large size and ecology, they have large spatial habitat requirements, and due to habitat loss, persecution, poisoning and climate change, they are under severe pressure, being currently classified internationally as ‘vulnerable’, and ‘endangered’ within South Africa. They are large cooperative breeding birds, living in groups of up to 12 individuals, and have a very slow reproductive rate, with one group producing a maximum of one chick per year.

This project will help us to understand the mechanisms, from nest site temperatures to parental heat dissipation behaviours, via which southern ground-hornbills and other large, bodied birds could be affected by anthropogenic climate change. The results will have important conservation implications, informing on how to mitigate these effects to ensure the persistence of many threatened and endangered species.