This project aims to determine the taxonomic status of the Kapany lemurs, which present an intermediate morphology beetwen Eulemur macaco (the black lemur) and Eulemur flavifrons (the black blue-eyed lemur). This will help to enable the red-listing of this potentially threatened lemur taxon by the IUCN. 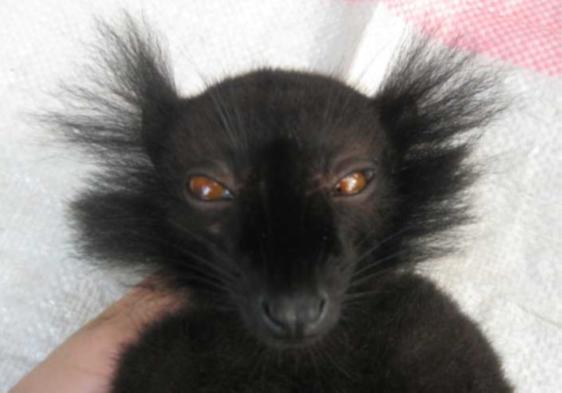 In 2003, in the Maromandia area and the Kapany Forest, researchers of AEECL (european association for the study and the conservation of lemurs) observed a population characterized by an intermediate morphology between Eulemur macaco and Eulemur flavifrons. They observed 49 individuals distributed in groups of about six animals, all presenting the same new morphology. This population will after be referred to as the “intermediate population” or “Kapany population”.

Without a scientific description, these lemurs can’t receive any protection. So the discovery of their relation to the genus Eulemur is essential for their conservation. Through the study of the taxonomy of the Kapany population, this project will allow a better protection of the black lemur and the blue-eyed black lemur (review of their repartition area, review of the boundaries of the National Park of Sahamalaza-Iles Radama, etc).

The first conclusion of the project will be the description of the Kapany population (creation of a morphometric data base), the mapping of its exact repartition area and its taxonomic statute (which is essential to put in place measures of protection for these primates).

Depending on the results of the genetics analysis, this study will have several consequences on the Kapany population as well as on E. macaco and E. flavifrons.

For example, if the Kapany population is simply a colour variant of one of the above mentioned two species of Eulemur, the morphologic description of that species will have to be changed accordingly.

In addition to these scientific considerations, if the intermediate population is linked to E. flavifrons (red-listed by IUCN), we will have to revise the range boundaries of this species. This would lead to an enlargement of the National Park of Sahamalaza-Iles Radama. This modification would be very beneficial for the conservation of the very special ecosystem of the Sahamalaza area. Moreover, an enlargement of the National Park could have several social benefits: creation of jobs for the local population, conservation education etc.