Community Based Biodiversity Monitoring and Conservation for Yala Wetland, Kenya

Grass-root initiative for the biodiversity monitoring and conservation of threatened Yala Wetland of Lake Victoria, Kenya.

Lake Victoria’s Yala Wetland is made up of mainly papyrus (Cyperus papyrus) stands. It is an internationally recognized Important Bird Area that hosts many papyrus endemic bird species some of which can only be found in Lake Victoria swamps all over the world. The swamp provides social, economic and ecological benefits, values and functions to the community and its biodiversity. These include being a habitat for wildlife such as the rare semi aquatic antelope, the Sitatunga (Tragelaphus spekii), Hippopotamus (Hippopotamus amphibius), African python (Python sebae) and wetlands specialists’ birds. 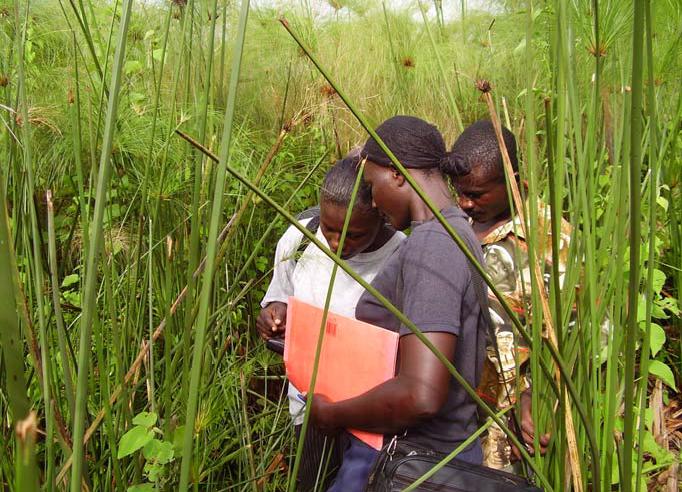 Survey and Monitoring Volunteers Learning how to Use GPS.

The papyrus specialist’s birds include:

Yala wetland complex which is the largest papyrus wetland in Kenya, East Africa, known for its birds-birds paradise, and satellite lakes holding endemic fish species that long disappeared in Lake Victoria is facing human threats such as wetland reclamation for agriculture, papyrus over-harvesting for cottage industry, poaching, burning for fishing and settlement. According to Kenya’s IBAs Status and Trends report 2004, agricultural encroachment threatens 50% of the wetland sites and 46 % of the total number of sites in Kenya and the general status of the IBA is on decline.

These threaten its existence and linked ecosystem services key to biodiversity conservation and grass-root livelihoods security. This project is to enable conservation of Yala Wetland through grass-root mobilisation and partnerships to deliver on habitat survey on the current ecosystem status in the face of ongoing threats, establish consistent grass-root detailed monitoring scheme for the wetland, habitat restoration, showcase nature based-enterprises to alleviate human pressure from the wetland, training of site conservation group and conservation education and public awareness for attitudinal and behaviour change for wetland conservation.

To facilitate grass-root based detailed monitoring and conservation of Yala Wetland.

b. To establish sustainable community based detailed monitoring scheme for Yala wetland.