This project is intended to equip local community with th knowledge and skills required to undertake conservation actions that address both conservation and livelihood needs, and contribute to sustainable conserve of wetlands and cranes in the project site. 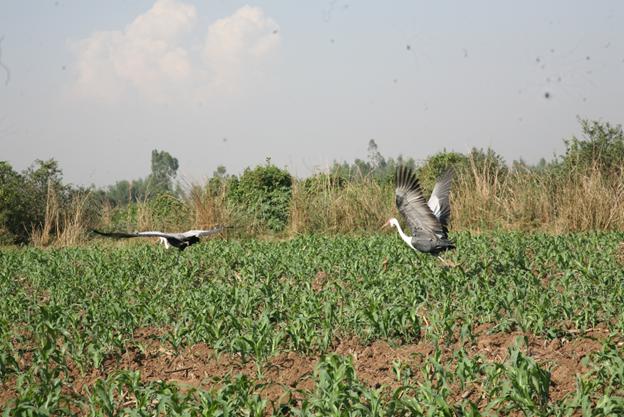 Wattled Crane pair flying to the other project site.

Wattled Cranes (WCs) are listed as a vulnerable species in IUCN. It is an endemic species to Africa and specialized to wetland habitats (Meine and Archibald 1996). The main populations of this species is exists in some African countries. During the past decades, populations in the range countries are fragmented and declined due to wetland habitat degradation and loss, and other anthropogenic factors. Because of wetland habitat degradations and losses, poor breeding conditions and lack of local community participation in conservation about 50% of Wattled Crane population reductions are reported in Ethiopia during the past decades.

To save the species and its habitats from further losses, during the first RSG period awareness creation programme was conducted on ecological and socioeconomic benefits of wetland habitats, conservation concerns of WCs and its breeding sites, and strengthen environment and nature conservation clubs in public schools. During this period wetland conversion to other land use types including of crop land is identified as a threat for wetland habitat conservation in the project area. Hence, to sustain and/or improve the above mentioned benefits of wetland ecosystems, and to save WCs from local extinction the current project (second RSG) is designed to build local community capacity through equipping with knowledge and skills required to undertaking conservation actions that favours both WCs and wetland habitat conservations, and community livelihood needs.

Therefore, objectives of this project includes:

• to monitor WCs population and breeding conditions in the project sites.