New Insect Named in Honour of The Rufford Foundation 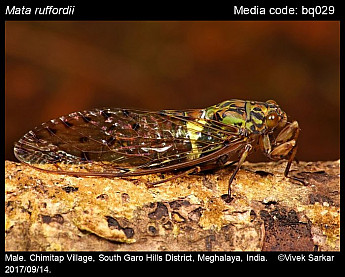 Rufford grantee, Vivek Sarkar, has been studying the natural history and acoustics of cicadas in the Indian state of Meghalaya. Vivek recently published a paper describing three new species, one of which, Mata ruffordii, was named in honour of The Rufford Foundation.

In Vivek’s words, “One of the three species is named as ruffordii to honour the support of The Rufford Foundation in conservation of nature and wildlife, starting from the smallest invertebrates to majestic mammals and their habitat. The Foundation has been supporting conservation related work of young researchers in India and many other countries for more than a decade and this is the least I could do.”

Species page on Cicadas of India